The Dirty Truth about Creosote 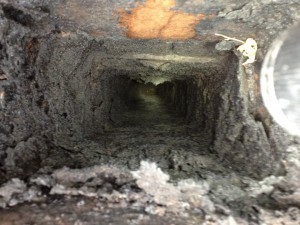 Creosote is something we deal with every day as professional chimney sweeps and fireplace technicians. It’s likely in your fireplace and chimney right now. Just because it is common, though, that doesn’t mean it’s okay. Creosote makes a chimney dirty, but that doesn’t mean it’s just dirt. Learn all about this fuel-burning byproduct and why you want it out of your chimney ASAP in today’s guide.

Where Does Creosote Come From?

First, we want to help you understand where this substance comes from in the first place. It builds up in your chimney because it originates as you burn wood in the fireplace. Burning wood and other fuels produces byproducts. Some of these are obvious, such as smoke and heat. Others, like water vapor and carbon monoxide, are not so obvious.

The smoke and water vapor, along with debris and soot from the fire, combine to create a sticky, tarlike substance. That’s what creosote is made up of. With too much moisture in the chimney, some of that byproduct is likely to become weighed down, sticking to the lining of your chimney or flue vent to create a dangerous situation.

Why Is It Dangerous?

Creosote is highly flammable. Minor chimney fires happen all the time—you may have experienced one in the past without even realizing it as they are often contained within the chimney. Even though it might not have set off any alarms, it may have caused permanent damage to the inside of the chimney.

Damage to the chimney makes it more likely for a chimney fire to spread to the outside of the home. So when there’s a high amount of creosote in your chimney, it’s more likely for a fire to start and spread to the outside of the home. While you should be most worried about this danger, there is another downside to creosote buildup: it causes a fire in your fireplace to burn less efficiently.

Can You Get It Out Yourself?

If you have a buildup of creosote in your chimney, you may be able to see it. Creosote can build in your fireplace, and fireplace sweeping may be possible with the right tools. However, if you notice a sticky, tarlike buildup in your fireplace, it’s likely in the chimney as well.

Cleaning the chimney is a job for a professional chimney sweep. They have the right tools, and can also provide an inspection to make sure the chimney is safe from fires.

Can You Avoid Creosote Buildup?

Creosote buildup is avoidable, to an extent, but that doesn’t mean you can skip annual chimney cleaning. A fire that burns properly and efficiently is less likely to produce large amounts of creosote. That means you should never burn anything but firewood, and that would should be dried and seasoned for six months or more.

But by far, the best way to prevent a creosote problem is with routine chimney sweeping. Call your local technicians for an inspection and cleaning today!